To organize utility data for a bill, we split data up into smaller objects called "blocks" and only include the blocks which are relevant to that bill. Separating information like this makes it easier to get started with a simple integration that only deals with basic information and extend it later as needed.

If a block is present for a given bill, it appears under the attribute corresponding to its type name documented here. The type names of all blocks available for a given bill are also listed in the blocks attribute on the bill object.

Note: If an attribute in a block is null, it either hasn't been found yet or doesn't exist. But if the meter's status is updated and there's a meters_full meter note, we finished collection successfully, so any data still missing is unavailable.

We have several universal blocks that we support across all utilities. We also have utility-specific blocks to include additional data that doesn't fit into any universal block. We document the attributes in each block type so that you know what you're getting when you parse a block.

Note: Although universal blocks aren't particular to a given utility, it takes time to implement new blocks, so while we roll out a new block it may not be present for all utilities. To see which blocks are supported for each utility, consult our data support article.

The Base Bill Block contains some basic information about the utility bill.

Line items are individual charges for a Bill.

This example shows the third party supply section of a residential electric bill and its corresponding suppliers block.

This example shows a CCA section from a PG&E bill and its resulting suppliers block. 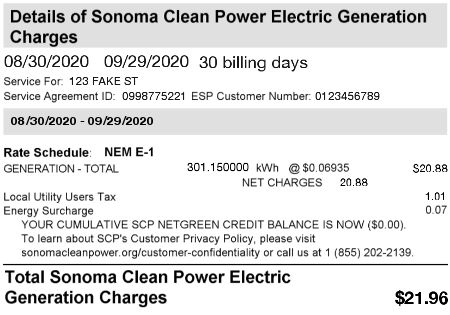 Tiers is a common way to charge customers for different amounts of usage. Since many utilities have tiers, we have created a universal block to break these down so you only have to build support for the Tiers Bill Block to perform basic tier analysis across many utilities.

Time-of-Use (TOU) is a common way to charge customers different rates at different times of the day (e.g. "buckets"). Since many utilities have TOU, we have created a universal block to break these down so you only have to build support for the Time-of-Use Bill Block to perform basic TOU analysis across utilities that have TOU charges.

Demand charges are a common way to charge customers for their power demand kW (as opposed to usage kWh). Since many utilities have demand charges, we have created a universal block to break these down so you only have to build support for the Demand Bill Block to perform basic demand charge analysis across many utilities.

Many utilities charge their customers (especially large commercial customers) for reactive demand (usually in kVar) in addition to real demand (usually in kW). Because this information is often presented differently by different utilities, we've created a power block that breaks down this data so that users who want to perform power factor analysis across many utilities only have to build support for one block.

Request Submitted!
We have submitted your customer support request! You should be cc'd on the email, and receive a reply soon.